How to Complete and File Form I-539 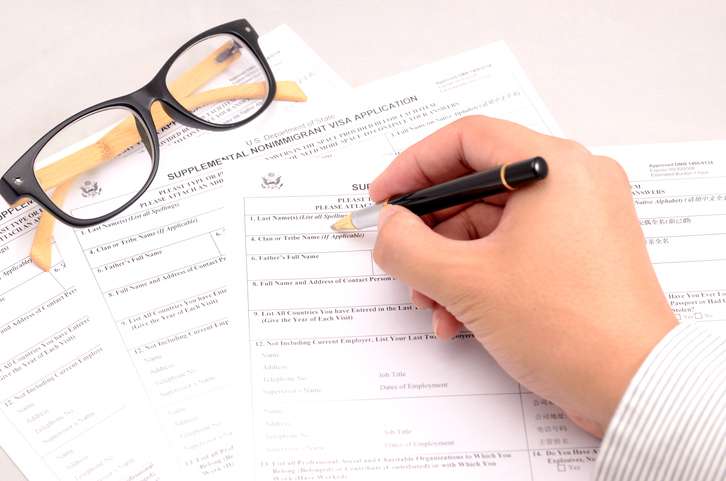 If you are an individual who may currently be living in the United States on a nonimmigrant visa, this means that you will be permitted to remain in the country for the amount of time that is specified on the visa itself; however, it also means that you will be required to fill out and file Form I-539, which is also commonly referred to as an Application to Change/Extend Nonimmigrant Status.

Generally defined, this is a form that is issued by USCIS, or the United States Citizenship and Immigration Services, and enables foreign nationals who are currently residing in the United States to ask for either a change or extension of their current visa status. It’s important to note, however, that this form is only able to be utilized if you wish to change to any other nonimmigrant visa status.

In terms of overall eligibility when it comes to filing Form I-539, this will be determined by your current visa itself. There are additional factors that can also affect your eligibility as well, including the following:

*Being convicted of a crime

*Working in the country illegally

*Failing to apply for an extension to your I-94

There are several types of nonimmigrant visa categories that are eligible to file Form I-539, which include the following:

*Holders of an A-visa such as an ambassador, public minister, consular officer, or career diplomat, as well as members of their immediate family.

*Holders of an A-3 visa such as an attendant, servant, and personal employee of anyone who currently holds an A-visa, as well as members of their immediate family.

*Holders of a B-visa such as B1 and B2 foreign nationals.

*Holders of an E-visa such as investors and treaty traders, as well as any dependents.

*Holders of a G-visa such as representatives of principal residents of foreign governments, as well as members of their immediate family.

*Holders of a G-5 visa such as attendants, servants, employees, or officials of a foreign government, as well as members of their immediate family.

*Holders of an H-4 visa, such as dependents of any temporary specialty worker.

*Holders of a K-3 visa, such as fiances of current United States citizens and any minor children.

*Holders of a K-4 visa, such as any dependent of a United States citizen.

*Holders of an M-visa, such as any vocational student and dependent.

*Holders of an N-visa, such as both parents and children of specific special immigrants.

*Holders of a NATO-7 visa, such as attendants, servants, personal employees of a NATO representative, employees, and officials, as well as members of their immediate family.

*Holders of an O-3 visa, such as dependents of those who are deemed to have extraordinary abilities.

*Holders of a P-4 visa, such as dependents of entertainers and athletes.

*Holders of an R-2 visa, such as dependents of a religious worker.

*Holders of a TD visa, such as dependents of holders of TN visas.

*Holders of a T visa, such as both trafficking victims and their dependents.

*Holders of a U visa, such as crime victims and their dependents.

*Holders of a V visa, such as dependents of specific permanent residents.

When it comes to being able to complete and file form I-539, there are specific guidelines that must be followed. First and foremost, you will need to request the form in either one of two ways:

*Contact the USCIS National Customer Service Center and request that a copy of the form be mailed to your current residence.

When filling out the form, you will need to ensure that you have the following types of documentation, as you may be required to include them as part of your application:

*A copy of your I-94, Arrival/Departure Record

*A copy of your passport

*A letter explaining why you wish to extend your stay in the United States, as well as the reason why your stay is temporary and the overall impact on the extension of your stay on your foreign residency or employment.

In order to properly complete Form I-539, you will need to do the following:

*Include all basic information about yourself, such as your name, current address, and your country of birth. You may also be asked to include additional information such as your A-number, USCIS Online Account Number, and your United States Social Security Number; however, if you do not have any of these items, you can leave these areas blank on the form.

*Make sure you select the appropriate box that indicates the intended purpose of your application. In the event that you will be including your spouse and children, you will likely need to fill out and file Form I-539A, Supplemental Information for Application to Extend/Change Nonimmigrant Status.

*Include the date that you would like to depart the United States, which should typically fall within whatever the maximum period is that is granted on your visa status. In the event that you have dependents and would like to include them on your application, this can be indicated by selecting “yes, filed with this Form I-539” as part of Question 3.a.

*Be sure to include any additional background information about yourself, such as if you are applying for an immigrant visa, if you have violated any conditions of your current visa status, if you have been convicted of a crime, etc.

Other additional pieces of important information to keep in mind in terms of completing and filing Form I-539 include the following:

*If you encounter any questions that do not specifically apply to your current situation, you can simply write “N/A” as the official answer.

*You are generally required to sign the form itself in black ink. Any applicants under the age of 14 are permitted to have a parent or legal guardian sign the form on their behalf.

*USCIS may issue applicants a Biometrics Services Appointment. This is an appointment that will indicate both the time and location of said appointment in which your photograph, fingerprints, and signature will be obtained so that your identity can be officially confirmed.

*If you include any information in a language other than English, you will be required to include a certified English translation in order to confirm that everything is complete and accurate.

*In the event that USCIS grants your extension request and your family members have been included in your application, then the extension will apply to everyone named in the application.